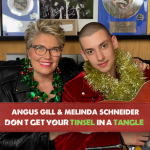 With four critically acclaimed, ARIA chart topping studio albums and seven #1 radio singles to his name, 2022 Golden Guitar winner Angus Gill is one of the most exciting and prodigious acts on the Australian Country Music scene. A musical chameleon, a gifted producer, a songwriter’s songwriter and a consummate performer, Gill is one of the youngest Australians to have performed on the Grand Ole Opry in Nashville, TN.

Melinda Schneider is an Australian music icon, a multi-award winning singer-songwriter, live performer, storyteller, the CEO and founder of Mpower Records, a sought after keynote speaker and a female empowerment activist. She’s enjoyed 40 years in Australian entertainment, released a whopping 14 albums and been awarded an unbelievable six CMAA Golden Guitars … Melinda is a fearless force to be reckoned with!
https://angusgill.com.au
https://melindaschneider.com/