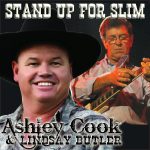 Ashley Cook is one of Australia’s leading and most authentic bush balladeers and like all the bush ballad stars of today, Ashley’s career and music has naturally been influenced by Slim Dusty.

Lindsay Butler spent 17 years touring and recording with Slim after joining his show in 1973. On that tour in Tasmania, Lindsay with Slim met the first member of The Slim Dusty Fan Club, (formed in 1972) Dudley ‘Spud’ Corbett for the first time. They all remained lifelong friends and Slim took a piece of both men with him when he passed in 2003.

“Stand Up For Slim” was written by Spud and Lindsay’s wife, business partner and award winning singer songwriter Shaza Leigh. Ashley has toured for over 20 years with The Butlers as a valued partner in the show and it is perfect for Cook and Butler to join forces to record this heartfelt tribute song on the impending 20th anniversary of the passing of Australia’s mate, Slim Dusty! It will be an honour for all Australian country music fans to remember, salute and “Stand Up For Slim”.
https://www.ashleycook.com.au/