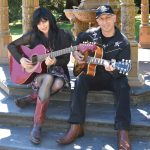 Destiny Band Oz is headed up by multi award-winning and chart-topping Australian husband and wife singer-songwriters, Thomas & Tessa Libreri, who burst onto the country music scene with their first single release in 2017.

Since then, they have amassed over 20 x #1 chart hits and over 20 major music awards both in Australia and internationally! The versatile pair have so far recorded 4 albums and 2 EPs with their album called ‘Changes’ winning the National Traditional Country Music Awards Top 10 Country album at Tamworth Country Music Festival in 2019 and their latest album, ‘Who I Might Be’ won an international music award for Best Folk Album in September 2021.

Their original music can be described as ‘Country, rock, folk and soul’ with strong personal and family influences. Destiny Band Oz also has over a dozen music videos on their YouTube Channel to check out.  They love having fun on stage and perform all around Australia; especially their local Gippsland area either as a duo or with their full band -So check out their gig guide on social media (@destinybandoz) and ‘make a date with destiny’!