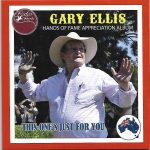 Australian Country Music Hands Of Fame inductee, Gary Ellis, grew up in Glen Iris, VIC, and his love of horses led him to a career in Country Music and also becoming a horse trainer by the age of 18.

From a childhood introduction to entertainment via the staging of concerts and magic tricks in his backyard for charity he went on to make regular appearances on Channel 7 during television’s debut year of 1956 as well as being a regular on 3DB’s Hillbilly Hour.

After a career spanning almost 70 years Gary continues to release new singles including his latest, ‘A Love That Should Have Been’ from his ‘This One’s For You’ album. The song laments the loss of a perfect love which can never be forgotten or replaced. Indeed, a love that should have been.