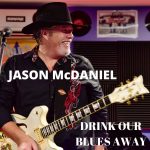 Jason McDaniel’s Rowdy Outlaw country music style, a blend of country, rock and blues is generating waves on many radio stations and playlists around the world.

Jason has never been one to toe the line … his musical influences of Waylon Jennings, Travis Tritt, Hank Williams Jnr, ZZ Top, Dire Straits and more shine through in his live shows and his songwriting.

In 1995, Jason released his debut album ‘Man in the Black Hat’ and then joined the band, Montana, as lead singer alongside Charley Boyter (Guitar), Allan James (Bass) and Greg Fisher (Drums). Over time the band changed its name to ‘Bushfire’ – showcasing a more Australian feel, then to the ‘Charley Boyter Band’.

2021 is a new beginning for all and has Jason releasing his new solo album ‘Honky Tonk Life’. 13 rowdy songs – all written by Jason about living life and having a good time. He has drawn on his influences of blues and rock and mixed them with country to come up with an album that once you put it on, will make you want to get up out of your seat, grab a drink and hit the dance floor … as Jason says, “country with drive”.