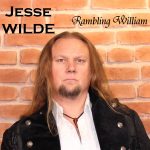 Jesse was raised in New Zealand on the music of the Rolling Stones, the Beatles, Paul Simon, Bob Seger, and Fleetwood Mac. He went on to develop his own musical interests including the sounds of popular Rock and Southern Rock artists such as Springsteen, Mellencamp, and Dylan and the vibrant up tempo alternative southern rock beat of Steve Earle & the Dukes. The result is the unique Southern Country Rock Americana flavour of Jesse Wilde. Jesse’s first major band was the well-known Acoustic Attitude which played a very successful mix of popular covers and original songs.

During a ‘Rock Pilgrimage’ of his musical influences, he met and played with John “Cougar” Mellencamp, Bob Seger and Steve Earle.

Jesse Wilde based himself back in Auckland and formed a band ‘Fiesta Drive’ which enjoyed much success in New Zealand. Jesse’s current band The Jesse Wilde Band and The Wilde Storey trio have played many successful gigs.