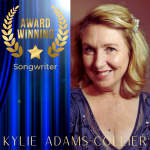 Described as a painter of words, Kylie’s deeply heartfelt songs of love, forgiveness and small-town memories are beautifully produced by Michael Carpenter.

Her songwriting encapsulates Australia’s people, history, stories and landscape including stories of being fearless like a magpie, the Bellinger valley, hot summer nights and old man dreaming.

Going back to her Bellingen roots in northern NSW, she has drawn on her childhood and mother’s love of music for inspiration for her latest album ‘Light as a Feather.’