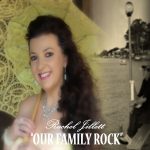 Rachel is known for her love of traditional country music and is proud to keep this style of music alive for those who love this genre of music. Rachel also wants to introduce this style of country music to the younger generations.
Rachel has released four studio albums through LBS Music and plans on working on her fifth album release over the coming months.

Rachel has won many awards since her debut album release “Traditional Country Girl” in 2010, followed by “Forever Country” in 2012. “Country Treasures” was released in 2016 and her latest album release “Country Hearted” in 2018.
Rachel hopes you enjoy her latest single, “Our Family Rock”.