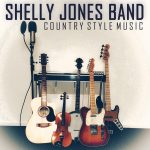 Throw in a few International #1 hits on Independent country music charts in Europe and the USA and it makes for an impressive musical resume!