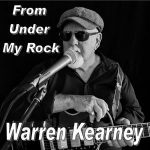 Warren Kearney is an award-winning singer and songwriter who has been in the music business for all of his adult life.  Warren and his wife Mandy ran Waranda Recording Studios in Mackay from the mid-’90s to 2004 before selling up to tour Australia. He toured with Mandy for thirteen years all over Australia, playing the Pub and Club circuit before settling down on the Darling Downs. He then became the Breakfast Announcer on the local Radio Station in Dalby.

He has released nineteen solo albums, five EPs and has taken part in multiple compilations and has recorded many albums and multiple singles for other artists over the years.

His five single releases in 2021 all made the Top 40 of the Australian Country Radio Airplay Charts.