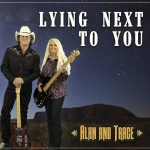 ALAN and TRACE are an exciting, Country music duo / band from Queensland Australia comprised of Tracey Davis and Alan Percy.

They won the “Traditional Country Music Duo / Band Of The Year” award at the 2018 Josie Independent Music Awards in Tennessee USA and in 2020 they were honoured to win the “Traditional Country Music Duo Of The Year” at the Red Carpet Awards in Holland.
Tracey Davis started playing bass guitar and singing in her Family dance band as a teenager, while also playing with various artists, before launching a successful solo career as singer songwriter and recording artist. Alan Percy is a singer/songwriter multi-instrumentalist . He has been entertaining audiences in Australia and Internationally now for over four decades fronting Bands, Trios, Duos and as a soloist. A lead and harmony singer and also accomplished on a variety of instruments as a lead guitarist, pedal steel guitarist, five string banjo, mandolin, bass guitar, piano and dobro.

Their 3 prior singles, “Help Me Make It Through The Night”, “Country’s What I Am” and “The Greatest Show On Earth” all reached #1 on the Country Songs Top 40 Australian Airplay Chart.