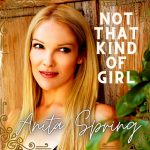 Anita, who grew up in a musical family, has been singing professionally since the age of 9 and has followed in the footsteps of her talented parents who toured with Johnny O’Keefe and Bob Hope.

She started eagerly writing songs again in 2017 following a trip to Nashville, Memphis and Graceland.
Returning to Nashville in May 2018, she collaborated with acclaimed songwriters and came home with a lot of great songs. She has now recorded and produced new songs, the majority of which are self-composed and is working with producer/musician Lindsay Waddington on an album project.

Anita has recently been nominated as a Semi-Finalist for New Songwriter of the Year for her song Midnight Train and also for Country Ballad for Changing My Mind at the 2022 Tamworth Songwriter Association Awards.