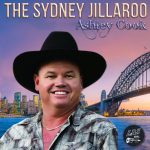 Ashley Cook, a 2019 Hands of Fame Inductee, is one of Australia’s premier Bush Balladeers and he walks a path of undisputed authenticity as to the fact that he lives the life he sings about.

Ashley operates one of the biggest draglines in Australia at Callide Mine near Biloela where he now lives with his wife Toni and their children on a cattle property south of Thangool.

The Central Queenslander Ashley grew up on his parent’s Mulgildie farm listening to Slim Dusty and Buddy Williams ballads.

He has released 7 albums, including tribute albums to both Brian Young and Buddy Williams, and he and his family tour the festival circuit from Roma, Miles, Wandoan, Rockhampton, Bundaberg, Hervey Bay, Springsure, Calliope, Maryborough, Emerald back home to Biloela.