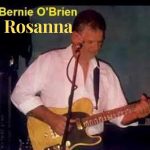 Bernie O’Brien is an icon of the Australian music scene, having toured with Marty Robbins and being a resident member of the Slim Dusty Band for some time.

Bernie was the leader of the band, Saltbush, with whom he won Golden Guitars and also toured the U.S.  Bernie got together with Gary Ellis, an Australian Country Music legend and Hands Of Fame inductee, to record an album which will soon be released.