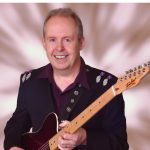 BOB HOWE – well-known in the music industry since 1975, is an acclaimed multi-instrumentalist. He has been Musical Director/Producer for many international stars, including Frank Ifield, Guy Mitchell and Diana Trask.

He was named 2007 ACM People’s Choice Awards ‘Musician of the Year’; won three ‘MO’ Awards and as a vocalist/producer/songwriter had international success with Nicki Gillis. In 2014 Bob was inducted into the Australian Country Music Hands of Fame in Tamworth.
http://shownet.com.au/bobhowe