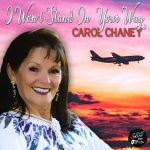 Carol Chaney is back after many years out of the music industry. Her return was due to an unexpected meeting with Shaza Leigh just a few years ago. Since then she has recorded her ﬁrst Award winning Album ‘A Million Stars’ with LBS Music.

‘A Million Stars’, produced by Lindsay Butler OAM (LBS Music) features a few of Carol’s favourite Traditional Covers and songs written by Australia’s First Lady of Song, Shaza Leigh including the latest single ‘I Won’t Stand In Your Way’. In conduction with the release of the single, Carol has commissioned Lachlan Butler of BAM (Butler Arms Media) to produce the accompanying video clip – available on Carol’s Website & YouTube Channel.

During 2021, Carol has won International and National Awards for her music.

Carol has moved from country Queensland to Tamworth, Australia’s Country Music Capital (NSW). Carol’s next performance will be during Tamworth’s 50th Country Music Festival in January 2022. She is looking forward to being able to perform live again and she is excited about catching up with old and new friends.