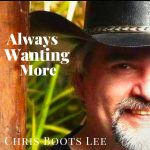 Christopher Lee, otherwise known as Chris Boots Lee, is a down to Earth country boy, born and raised in the rural small town of, Covington, Virginia, USA.
He was raised in a close-knit community where friends and family are what matter most, and music is the glue that holds everything together.

Chris has been singing since the age of three, and is parents still have old cassettes of him singing along to the old AM radio, with their portable cassette recorder.

He grew up in a musical family, and sincerely hopes that he respectfully carries on the family tradition.

He has dreamed of being a star all of his life, and his musical career skyrocketed when he migrated to Australia on November 3rd, 2008.

He has been blessed to have made many priceless friendships and connections through music, since his arrival in Australia , and has humbly received a few awards along the way. Some of them include being a semi-finalist in the 2013 Aristocrat Entertainer Of The Year, Best Male Vocalist in the Gippsland Country Music Awards, Best Country Music Video – Australia 2012 in the 2012 Australian Independent Music Awards, a nominee in the 2015 CMAA Awards, and also having two music videos showcased on CMC, before their departure.