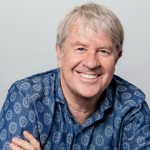 Singer/songwriter David Curtis stands out as being the youngest hitmaker that New Zealand has ever produced when he recorded ‘Wheel of Fortune’ in October 1970. The result was an instant smash hit and gold record. David recorded two albums on the HMV label and in 197, as a 14-year-old, he composed ‘Take Your Leave’ which won a nationally televised songwriting competition and went to number 3 on the national charts.

During the 1980s David toured with The Hollies, Leo Sayer, The Irish Rovers, Richard Clayderman and The Troggs. In 1985 David left New Zealand for England where he remained until the mid ‘90s entertaining in various clubs in and around London. He spent 6 months touring England in ‘Joseph and the Amazing Technicolour Dreamcoat’.

A decision was made to return to New Zealand in 1994 where David, now a committed Christian, lives with his family. David has built a home recording studio where he reflects his love of gospel, country/folk music with the songs he is writing and singing.