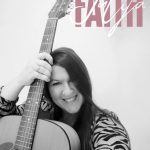 Faith is no stranger to the music world & has studied various forms of dance, drama, song & music. Her passion for singing has seen her performing and supporting various artists, from a young age, as well as being a part of various live show productions – both as lead vocalist and backup singer. Her energy, contagious smile & down to earth nature, is a crowd puller.

It was back in 2003, Faith fell in love with country music, after visiting the Tamworth Country music festival. Inspired, Faith picked up a guitar and started writing her own songs. Catchy songs that displayed Faith’s playful heart, and her vivacious nature. Faith’s songwriting was acknowledged in various competitions.

Shortly afterwards, Faith released her debut album: “Glimpse of Life”. (With 7 of the 10 tracks self-penned) As well as releasing her first single “It’s Not Fair But I Don’t Care” to radio, Australia wide.
The next years gave Faith an accolade of performances, awards and achievements under her belt, including: Finalist at the New Zealand Gold Guitar Awards, Finalist in the NSW Champion of Champions, Australia, Finalist for the Golden Saddle Award, Australia, Finalist in the ‘The Toyota Star Maker Talent Search’, Australia

After a break from the ‘lime-light’, to raise a family & dive deeper into her songwriting style, Faith is finally back!
In 2020, Faith Julija re-released her album, “Glimpse of Life”, & single “Road’s In The Mirror,” which effectively put Faith Julija’s music in rotation on Country Music Radio, Australia wide, plus in Europe.

Hot on the heels of releasing her single, “I Like Your Truck”, Faith also released a Christmas holiday song, “It’s December”, which also captured the listeners’ hearts – and resulted in another #1 hit.
With songs displaying catchy lyrics and her own distinct sound – Faith Julija is undoubtedly, someone to keep an eye out for.