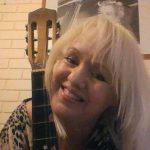 Faye Kristiansen has been involved in the music industry for almost 30 years and is one incredible Australian female vocalist. In her younger years she was a rock singer but upon meeting her future husband, Darren Heywood, she joined his band, ‘Sliprail’ and country music became her future.

The band disbanded in 2006 and Faye then re-branded Sliprail as a more acoustic, bluegrass-style ensemble. They toured and performed around Australia until Faye developed health problems.

After recently enduring hardships of bushfires, floods and cancer followed by major ear surgery, it is wonderful to see Faye sharing her talents on the airwaves again.

Faye was excited to revive her recording career with her recent single,  the Shaza Leigh-penned ‘That Man Who Hung The Moon’ and the momentum continues to build with her new single release, ‘One Good Love’ which Faye co-wrote with producer Mike Caen.

As they say, new beginnings can make your dreams come true and the future is now looking far brighter for Faye and partner Darren, as they prepare to hit the festival and tour circuit as soon as possible, taking their brand of country music to all areas of Australia.