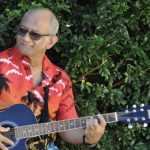 Glenn Levi is an ex-serviceman of the Australian Army. He moved to Western Australia back in the ‘70s and after travelling around Australia with the Army, now calls Perth home. Glenn is also a singer who has always had a passion for music and singing and is well known around Perth and gets quite a lot of bookings as a solo performer.

Glenn’s first instrument was the harmonica and then he later taught himself to play the drums and also the guitar. He has been the front man in various bands and duos and is highly regarded for his showmanship and his kind nature towards his audience. He has had no professional training and plays and sings by ear. Glenn’s first love is rock n roll music but has slowly been turning his attention to country music as well.

Glenn has now released his first original country song entitled “Come Back Baby” which he composed with the help of some incredibly talented musicians in Nashville.