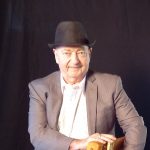 Master of Roll n’ Roll/ Retro Country style under the early influences of artists like Chuck Berry, Don Williams, Del Shannon, Elvis Presley and Johnny Cash, Johnny has a unique voice and style making his music an easy listen and his stage craft a pleasure to savour. With the delivery of his own take on many a classic ‘50s-‘80s rock n’ roll or country song Johnny seamlessly intergrates his blossoming catalogue of original music into his performances much to the crowds delight. Many a time Johnny has been complimented by his audiences suggesting he has a voice similar to Johnny Cash.

With many years of experience in the entertainment business, Johnny Shilo now sees it as his time to fully achieve his potential as a singer songwriter, telling his own stories of life, love and laughter.

Johnny contracted Polio at the age of 13 months affecting his muscles and the growth of his right leg and has only use of his left leg and as a result walks on crutches permanently. It has never dampened his spirit and has never stopped him from performing professionally.

Along with Johnny’s life experiences and his music buddy Marion Shilo being legally blind both have so much to offer collaborating with their original songs.
The input of passion Marion has for song-writing, and the collaborating opportunities they are taking up with other artists, is opening up a whole new dimension of Johnny’s music.

Johnny has had some great success with both his “Rock n’ Roll Country” album and  his current album  “All Things New”, having his songs played on radio nationally and internationally.Johnny continues to lead the way and inspire others with his “can do” professional attitude, tenacity and long term love of music. He is currently working on writing more original songs with Marion for his next album. “Cowboys Come Alive After Five” being the first to be released.
https://johnnyshiloentertainment.com