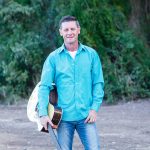 Lloyd Back was born in Hughenden, Queensland, and has spent almost all his life living in rural areas of Queensland, including 20+ years in the South Burnett. His songs draw on both his own and other people’s life experiences, and are songs that move people. A relaxed and easy listening performer, Lloyd’s songs connect with a wide range of people of all ages from many differing walks of life.

To date Lloyd has six recordings (his seventh album due for release early 2023), with his last three all being award-winning albums which delivered four #1 singles and lots of chart success. Some recent career highlights include;