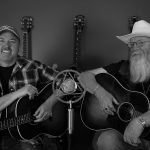 What started in late 2020 as a one-off songwriting session between multi-instrumentalist and record producer Lindsay Waddington and veteran singer songwriter Allan Caswell quickly turned into a band called Lynchburg and an album called How Country Do You Want it? The album produced several chart hits and a couple of number ones for Lynchburg and the songwriting team also wrote the songs that produced number one hits for Waddo himself and Sharon Heaslip.

While all this was going on Cas and Waddo kept writing the songs that were to become Lynchburg’s second album I Love This Rodeo. Exploring every corner of classic country music, Lynchburg built on the sound and styles they developed on How Country Do You Want It? They constantly pushed each other to write and record the best versions of the best songs they could come up with.

“I’d walk into the studio and Waddo would sometimes have a whole track with drums, bass and guitars already down and I would be expected to come up with a lyric for it … the tunes were so good the lyrics seemed to write themselves”

“And I’d play Cas my new instrumental, only to have him write lyrics all over it …”

Other songs were written together from fragments of lyrics or basic feels and chord progressions … songs were being written at a great rate for I Love This Rodeo, for other artists or for the third Lynchburg album.