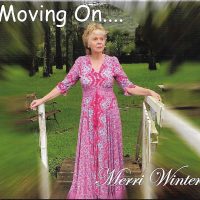 Merri has had a long and varied career in the music industry, both in Australia and overseas.

Born in Tasmania, Merri and her family moved to Victoria where Merri attended teachers’ college in Ballarat. It was here that she became interested in the entertainment industry, in particular the music from the Folk Era, performing at local cafes etc. Joan Baez, Joni Mitchell, Peter, Paul and Mary being some of her favourite artists.

After moving to the Riverina area Merri joined a band called The Shiralees and worked constantly throughout the area for 3 years.

During a trip overseas she based herself in Dublin for 5 years where she sang with a band in local pubs and cabaret spots. She teamed up with 2 songwriters who wanted their songs heard. This led to Merri representing Australia in song festivals in Ireland and Bulgaria. One of their songs is on the new album, ‘Moving On’.

Now influenced by many country singers including Trisha Yearwood and Patsy Cline she recorded her first single, ‘Ticket To The Blues’ which received a great deal of airplay on the local and community radio stations around Australia.

In the early ‘90s Merri moved to Yanderra, NSW, just out of Sydney and toured with the Tony Martin Band throughout NSW and Victoria and recorded an album called ‘Someday Soon’ which, up until this day, has received many accolades from radio presenters, musicians and audiences at her many live performances.

Now living in the coastal village of Portarlington in Victoria, Merri has become very popular on the Bellarine Peninsula. She works constantly at the Bellarine Country Music Club and also performs in many Bluegrass jams and Folk Club nights….. her first love.

When asked her favourite performers these days Merri says that it is the song that is important. The lyrics that mean something to her. This way every time she sings the song she can feel it.

Merri has just recorded a new album with Bill Chambers called ‘Moving On’. Every track has a story behind it and, as she says, she was very lucky to be given a couple of Bill’s songs that he had not recorded. It has been a dream come true for her.