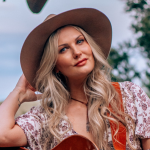 Miranda Easten is a country singer and songwriter from Christchurch, New Zealand.

In 2020 and 2021 she was a semi-finalist in the International Songwriting Competition ‘Unsigned Only’ (ISC).

In 2021 Miranda became the host of ‘Plains Country’, a weekly live radio show on Plains FM.

Miranda is currently working on her second album with the first single and music video ‘View From Here’ gaining success worldwide.
https://mirandaeasten.com/