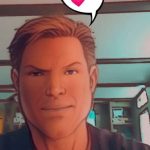 Patrick began writing songs at the age of 9. Patrick’s musical influences over the years include pop, rock, Christian and country. Patrick landed a publishing deal in Nashville and began writing with some of the country’s top songwriters including; Steve Clark (Better Off in a Pine Box), Larry Henley, Nashville Hall of Fame inductee (Wind Beneath My Wings), Danny Wells (Check Yes or No) and Grammy Award winner Kathy Louvin to name just a few.

Patrick is also an accomplished vocalist, known as a singer who delivers emotion and passion with each song he sings. Patrick will be in the studio soon recording new music so stay tuned!