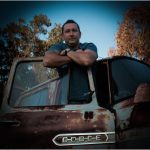 Paul Ricketts can be described as your average Australian bloke with a love for the bush and farm life. He lives in rural Qld on the family sheep/goat property with his wife and children. The country life has definitely influenced his style of music, leaning more towards the edgy side of country.

Studying the Theory of Music in his teenage years, Paul carried his knowledge and passion for music with him throughout his life, joining bands and playing gigs with other musicians on the local circuit. Songwriting was fast becoming a part of Paul’s musical pathway, so he went solo in 2021 to focus on recording his debut single, “My Side Of Town” which was released in December that year.  Since then, he has been regularly gigging venues as a solo acoustic act, playing covers and originals.

Paul’s most recent project has been the formation of a country rock trio, dubbed the Paul Ricketts Express.  The trio is currently in the throes of preparing to record the rest of an EP.  As well as his own projects, Paul has also been co-writing with North Queensland Artist, Aurelle Brunjes and will soon be recording a duet together.