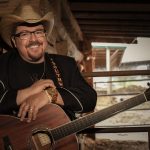 “Country No Matter What Country” by Southworth and award-winning songwriter/radio personality Bill Whyte, the song sends a simple, unifying message: Country Music is Country Music no matter what country you are from. Having toured across Europe several times, Scott has shared the stage, performed, written and jammed with fellow Indie Country artists…and made lifelong friends in the process.

“The general song concept of Country Music being a universal language gave me the idea of WHAT IF?” Southworth recalls, “What if I could get a bunch of fellow artists together and collaborate internationally on a scale that I had not seen done before?” With that in mind, Scott went to work, reaching out to friends across the Atlantic and the Pacific Oceans to recruit his international “Super Group”.

“Country No Matter What Country” features Glen Mitchell (U.K.), Sivert Bjordal (Norway), Johnny Brady (Ireland), Andrea Benz (Switzerland), Kevin Greaves (New Zealand), Jerome “Mr. Jay” Desoteux (France) and Southworth from the USA. “These are all accomplished writers and artists that have had varying degrees of success in their countries and even here in Nashville.”