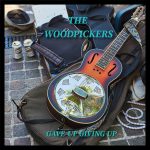 The Woodpickers are a country, folk, roots group from The Blue Mountains NSW, Australia. Not to be confused with other groups using our registered name. Over a period of 20 years 4 CDs have been released and over the past 4 years 12 digital singles. The Woodpickers have received airplay, and charted, worldwide.

Prior to founding The Woodpickers John Murphy was a founder member of Sydney Blues Band, The Foreday Riders and remained a member for 8 years before leaving to play with an assortment of country and country rock bands.

John sent some self-composed songs to Broderick Smith, a fellow Foreday Riders member and friend who decided they were not for him and he then passed them on to The Dead Ringer Band who recorded and released ‘Too Many Friends’. This gave John the incentive to continue songwriting and to form The Woodpickers for whom he contributes bass, guitar and mandolin.