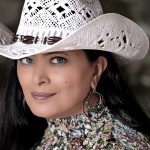 From a very young age Vanessa was introduced to traditional country and she remembers almost every word to every song from her childhood home, which were filled with tones of Merle Haggard, Patsy Cline, George Jones, Loretta Lynn, and other greats.

To begin with, Vanessa started singing cover songs a few years ago and initially built a fan base around it but about 4 years ago she started writing her own songs and this helped her climb the ladder of success.  Her decision to keep her original music traditional country was the best decision she has ever made because she said ‘ traditional country allows me to express myself more easily in a song and I feel  honoured to carry on traditional country.

Her first big step into the limelight was in 2020 when she went to Nashville to record her first album YOUNG AT HEART. Not only did this album win her The Will Rogers Award for ‘Pure Country Female Artist of The Year’ (Academy Of Western Artists), but while in Nashville she was signed to Black Ribbon Records LLC, Nashville, Tennessee. Every song she has released from the album is on almost every country radio station from Australia to Europe to America and has topped the country charts world-wide.

This year in 2022 she headed down to Nashville and has brough home a brand-new album and it has already received great reviews by The Country Peoples Magazine placing her as ‘featured artist’ on the first week of release of her album ‘Give Me A Break’. In October Vanessa will be walking the Red Carpet at the Grand Ole Opry for her nomination at The Josie Music Awards for “Traditional Country – Artist Of The Year 2022’. She will also be representing Australia in Marshall, Texas for her multiple nominations at the Texas Sounds, International Country Music Awards where she will also be performing and added to it all, Vanessa has just been invited  to be an honoured guest at the CMA Texas Awards which she will also be attending in October.

Vanessa vows to remain loyal to Traditional Country and adds that her fans who listen to country music have the kindest hearts.