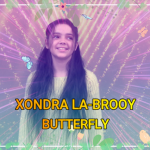 10 year old Xondra Tuscany Storm La-Brooy is about to take the world by storm – true to her name! She has written, recorded and released her debut single titled ‘Butterfly’.

This is a fantastic accomplishment by this young singer/songwriter who is still in primary school and very much a child. Daughter of singer/songwriter Kerrigan La-Brooy, she proves that the apple doesn’t fall far from the tree. The fact that her doting Dad wishes her way more success than himself is a no brainer.

Xondra is one of 6 siblings – 4th in the line-up and the youngest of two girls. She’s an engaging writer and story-teller and she was able to cleverly weave these skills into her song-writing. Her voice is as sweet and mellow as it is captivating. She loves painting and knitting among other hobbies.

Xondra is an inspiration to her peers and is sure to motivate other children to pursue their dreams and nurture their talent. She hopes you enjoy her debut single and thanks you for your airplay and support.