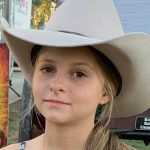 Amy is a young girl with big dreams and nothing will get in her way. She may be little but has a big personality and voice to go with it. Since Amy was nine she has been fortunate enough to collaborate with iconic Australian and American Country music artists.

In 2019 the family traveled to the Tamworth country music festival where Amy was introduced to the world of Live country music and was in awe. This is where Amy met Australia’s Queen of Bluegrass Kristy Cox. Amy loved everything Tamworth had to offer, especially Bluegrass Country Music.

The family decided to return the following year and Amy entered the young talent contests singing her song “Back to Tamworth” and Bill Monroe’s “Blue Moon of Kentucky”.  Amy placed in both contests and loved everything about performing on stage.  Amy had her first taste of busking and to say the least it was a successful Tamworth.

Since then, the family has returned each year to the festival along with many others, such as Music in the Mulga, Back to Basics, Capella and more, partaking in the walkup stages and competitions available across the Country music scene.  Some of Amy’s achievements are:

In 2020 Amy also released her first single “Sitting Pretty” across all platforms and will have her EP available December 2022.  Amy busks regularly at markets and venues saving money to fund her life dream of being a musician. Amy enjoys telling her stories through lyrics and playing guitar and loves performing these whenever she has the opportunity.  Amy is a junior graduate of the Australian country music Academy in 2021 and attends many song camps and workshops co-writing with the best in the business.

Amy has recently attended her first Gympie Country Music festival in the youth muster showcase and is becoming noticed across the festival scene picking up bookings in both QLD and NSW.

Amy has captured the attention of many in the audience and the music industry with her big personality, confidence and skills.