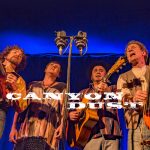 American Alt Country meets Folk and Westcoast harmony. Canyon Dust performs originals inspired by the ‘Laurel Canyon – Westcoast’ tradition of the 60’s and 70’s and interprets some of the greatest songs written in this period.

They have performed at the Flying Saucer Club, Caravan Music Club, Satellite Lounge and MEMO Music Hall. They Co headlined the ‘Outback Fusion Festival’ in 2018 with Christine Anu and performed on the Café Culture Tour of Regional Vic in Aug-Sep 2019. Canyon Dust has also taken the stage at Harvest N Graze Fest Docklands and Festival of Sails in Geelong. ‘Live to Airs’ on the ‘Conversation Hour’ with Jon Faine, the ‘Friday Revue’ with Brian Nankervis & Richelle Hunt and the ‘Evening Program’ with Lindy Burn on ABC 774. Canyon Dust also appeared on the ‘ABC Drive Program’ in Perth.
https://www.facebook.com/CanyonDust