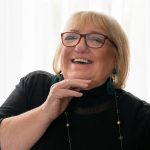 Cathy is a multi-award-winning singer/songwriter from Melbourne who was recently recognised for “Songwriting Excellence” by the Australian Songwriters Association with the Rudy Brandsma Award,

Her new album -“Living in Mediocreville”, will be released before the end of the year. The album has 9 originals and one cover “Midnight Special”. Cathy’s music has been sung by other artists (Andrew Swift, Khristian Mizzi, Clint Wilson), used in film (Gangster Dreaming) and a play by Harris Smart (Dolly).

“Living in Mediocreville” was recorded by Damian Cafarella and Lachlan Bryan at the End of Road studio (EOR) in Edithvale, Melbourne.

Cover artwork has been done by Tracey Roberts, a local artist in the Dandenong Ranges.

The inspiration for Cathy’s songs come from everyday life-what’s going on around her with family and friends, or in the news.

Cathy plays guitar and the songs for this album were written with her Maton guitars.