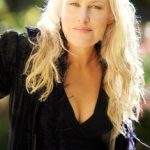 Donna Fisk is an Award-Winning Singer, Songwriter-Recording Artist, Producer and Royal Command Performer with several number one chart topping hit recordings & the honour of being immortalised in the Australian Country Music Fame Park.