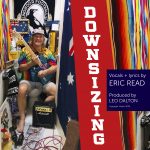 Queensland songwriter Eric Read’s comedy song Downsizing, which came to life during the COVID lockdown of March/April 2020, has caught the attention of judges in several songwriting competitions.

While the idea for the song came from stories from a few mates who had downsized their homes, it was written in an airport departure lounge last February and recorded during the COVID lockdown of March/April 2020.

Eric won the Tamworth Songwriters’ Association Comedy Novelty Song of the Year for 2020 with Wouldn’t Be Dead for Quids, from his second album The Original Eric Read released in 2019.

The album is the culmination of many decades of songwriting for this Sunshine Coast-based entertainer— with comedy songs and ballads featuring on this latest album.

The album is aptly named as nine of the 14 songs on the album are originals that Eric has written and performed over the years.

“There’s ballads about family and friends and real life and as a lifetime lover of humour and the ability to see the funny side of most situations, many of my new songs are just that.

A long-time rhythm section musician and entertainer with a background in several semi pro bands over the years, Eric has more recently embraced a new focus as a solo performer with the added art of his love of ventriloquism

“Encouragement has given me confidence and it goes to show that we can achieve great things at any stage in our lives.”