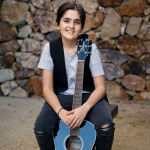 In July 2022 Jake was invited on national television to perform LIVE on STUDIO 10 with Tristan MacManus and Sarah Harris. Jake has been interviewed LIVE in studio on Juice 1073, ABC Gold Coast, Brisbane and Wide Bay, Kix Country and 2TM in Tamworth. Jake has also featured LIVE on air on more than 100 commercial and community radio stations across Australia, including country music syndicated shows. Jake has also been interviewed in many magazines and newspapers nationwide and international.

Another major career highlight is as a guest performer playing on stage with Andrew Farriss with his full band The Rainmakers at Moonshiners Honky Tonk Bar in Tamworth in April 2022. An incredible honour! Also in 2022, Jake was invited by Tania Kernaghan to perform on her TK Club ‘Don’t Bore Us, Give Us The Chorus’ May episode. In July 2022 Jake performed as a special guest for Shelley and Lawrie Minson at Hats Off To Country Music Festival in Tamworth.