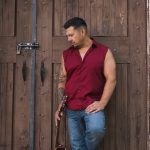 Jim Jacobs was born in the small town of Hagersville Ontario and raised in Smoothtown on the Six Nations of The Grand River. Jim grew up on his Grandparents Beef Cattle/ Cash Crop farm working as a team with his family throughout his childhood and teenage years listening to Country Legends George Jones, Merle Haggard, Waylon, Willie, and Conway just to name a few and learning their songs on the guitar along the way. No matter where he went there was always one of these guys on the radio.

Jim was also heavily into sports playing Lacrosse, Hockey, and Football to which he decided to pursue football eventually getting a scholarship to Missouri Valley College and also playing a little Semi-pro. After injuries restricted him from playing further he returned home. Jim soon took up his love of writing and performing Country songs in the styles of the legends he always looked up to and being the dreamer he  eventually made a move to Nashville TN. While in Nashville Jim worked tirelessly in construction and transportation to earn a living learning some hard life lessons along the way performing occasionally at a few open mics and playing guitar for another artist.

After a few years in Nashville, Jim met Mr. Robby Turner who would soon become one of his closest friends and began assisting him with other artists in the studio.

It was in 2011 Jim got the worst news of his life as his Mother was diagnosed with Cancer. Without hesitation Jim left Music City and moved home to help with anything his Mom needed. After winning a few battles over a couple years the disease had taken over and sadly Mrs. Isabel Jacobs had passed.

Having been raised to never give up and always try his best by his parents and family, he decided it was time to start his own project and put all his time and energy into writing about the life lessons he learned, making many trips back to Nashville over the years to record with his friend Robby Turner on the Turner-Up Recording Label.