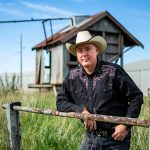 Hailing from Orange in the Central West of New South Wales, Traditional Country Singer-Songwriter Justin Landers brings rich vocal tones and heartfelt stories that express a true authentic country flavour. Much of his song writing themes emanate from his childhood upbringing, and real life experience, growing up in the township of Cobar and spending much of his teenage years in the Coonabarabran area.
Justin began performing as a professional soloist in late 2013. Prior to this, Justin has 20 years’ experience as a performer & musician with the majority of this time spent in the popular Orange based duos ‘Warp II’ & ‘Guess What’.

Justin is a much sought after performer in the Central West with a prevalent following of loyal fans and venues who are drawn to his friendly nature and charm and his high spirited performances. To his credit, Justin was awarded the Ken Pritchard Memorial ‘Dusty Boot Award’ for Services to Country Music in June 2021 at the Dusty Boots Annual Long Weekend held in Narromine, NSW.