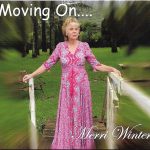 Merri Winter, a Tasmanian born Victorian resident, has had a long and varied musical career both in Australia and overseas, including 5 years based in Dublin. She has been a member of several bands such as The Shiralees, the Tony Cornish Unity Band and she toured with the Tony Martin Band.

“I was delighted to recently work with the legendary Bill Chambers as he produced all 13 tracks for my new album, ‘Moving On’. “I was even more excited when he generously offered me the opportunity to record two of his unrecorded compositions for inclusion on my album. ‘Sweetest Sound’, the first single released off the album, is one of those two songs and it was co-written with Sara Cotton.” – Merri Winter.

She is having an album launch in Portarlington on August 14th and again in Shepparton on September 22nd at the Cricketers Arms in Mooroopna.