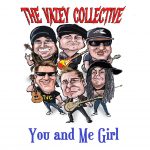 The Vazey Collective is a six-piece band from New Zealand that formed over 2016-2017. This determined and accomplished group of musicians know what they want. Their music will speak to many and is old school, dynamic and real, covering many genres but still just good old rock.

The band features the spectacular Antony Pickard on lead vocals. His powerful and compelling voice is up with the best and it was mentioned by Midge Marsden, while performing on one of the songs, that “Ants could sing the phone book and you would listen”. This is a true testament coming from one of New Zealand’s best musicians.

This band has the ability to blow your mind, whether it be from an in-your-face rock song to a laid-back ballad. Either way they create a compelling and irresistible sound not to be missed.